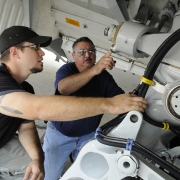 In a 2017 survey of post-secondary readiness, only 31.6% of students who had earned a high school diploma in 2012 graduated from college after six years. Therefore, a staggering two-thirds of our youth (from all socioeconomic backgrounds) have graduated from high school and have not obtained a college diploma. Factor in the statistic that only 10% of the college graduating students are from low-income households, and a crisis emerges. In the past 20 years we have relied on supporting the growth of excellent public school systems to solve this crisis. These schools in low-income communities have helped children and families to beat the odds and have been able to increase the 10% college graduates to 50%. While this improvement beats the national average and has helped a ton of kids and families, we still are producing a life-long and societal hole for half of our children as they become adults.

The push over the past 20 years towards “college-for-all” has been a noble, social justice-motivated effort, given far too many students were not aware of their post-secondary options, nor were they prepared to be successful in these options. This work has created a debate over whether or not college is right for every student. And it’s a hard debate to even have……people have learned not to express a thought that college isn’t right for everyone for fear of being viewed as offering up an unjust or even a racist thought. To get past the noise of this debate, being able to have an open and honest conversation, and focus on the work, I offer up the following: we can agree that college is not right for every student; however, the skills (both technical and character) to go to college are right for every student. Furthermore, the mission of any school system should not be to choose between sending all its students to college or preparing all its students with a specific job skill; it should be to prepare all its students with the academic, career, and life skills they need to have the FREEDOM to make their own choice at age 18 (and at age 28, 38, 48, etc.) on their career path to become contributing, virtuous members of society.

Tremendous efforts have been made in the past 20 years to incorporate college preparedness inside various school systems, but not an equal effort has been placed on Career Tech/Mid Skills curriculum and instruction. Whether this lack of focus is due to the debate of not wanting to appear on the wrong side of the social justice “college-for-all” effort, or simply because a solid Career Tech plan involves multiple partners working in a coordinated way, it is time to answer the debate with various Both/And solutions.

The education reform work of the past two decades has been invaluable to hold teachers, schools, and school systems more accountable for student achievement outcomes, and countless children have benefited in school and life from the work….but not all our children. The time has come to have those student achievement outcomes mature and evolve beyond passing tests or achieving a piece of paper stating a certificate or diploma has been awarded. Time has come to build on our student achievement efforts to align outcomes with what industries and employers want to see in a productive workforce. Having the skills and virtues to pursue a career of choice is the ultimate and final-scorecard reason why schools and school systems do their work. We need more schools that will model this focus as our collective work continues to evolve, and help build a better tomorrow.